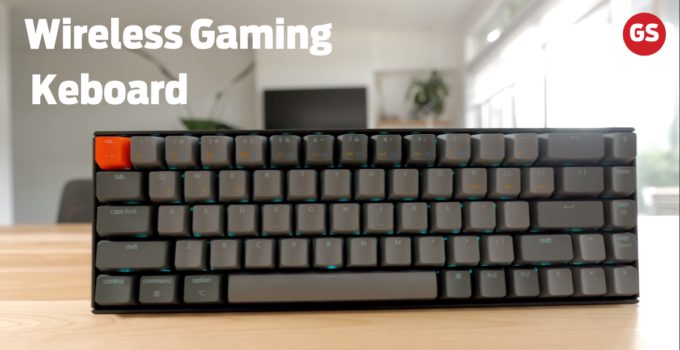 We’ll take a look at keychron attempt at making a 65% mechanical keyboard that is the k6 keychron now has hot-swapped versions of their keyboards making them even more interesting so let’s see if this k6 is worth considering.

A wire keycaps puller it’s cool that they include replacement keycaps to get rid of the orange accent keys if you don’t like them.

The keyboard has a bunch of configuration options it can come with a bare bone plastic case.

But also with an aluminum frame for an additional 10 dollars mine came without them and I think it looks slightly unfinished with the plastic rails all around clearly meant for those aluminum bars.

The cheapest option has white LEDs and a plastic case but mine is the variant with RGB LEDs this all-plastic build weighs in at around 1.2 pounds or 540 grams all the ports and controls are on the left side.

There is a USB-C port I like having it on the side as it really pushes the cable to the side more than at the back then there are two switches the one nearest to the USB port is meant to switch between a mac and windows layout.

I personally leave it on the windows mode even on a mac as that’s how all mechanical keyboards act on the mac.

So that’s what I’m used to then there is a switch to alternate between off cable connectivity and bluetooth connectivity I’m not sure why there is a cable and off mode though.

I don’t see why I turn off the keyboard while connected over USB finally at the bottom there are flip-out feet with two heights for a total of three angles presets that’s a nice touch as not all small form factor keyboards of them.

There are four rubber pads in contact with the surface with all angle options so that’s great as usual with keychron keyboards the chin is quite tall so.

Most people would benefit from a wrist rest with this unit although i used the keyboard for a few days at work for a full day and didn’t experience any sort of wrist fatigue.

This keyboard has a standard 65% NC layout although it’s not a 100 standard like most 65 keyboards right side modifiers are narrower at one unit wide and you need a 1.75 unit wide right shift key

Most keycap sets accommodating other layouts should have these additional keycaps where you might need to compromise is for the navigation keys at the rightmost column.

these will likely not have the right profile for the row they are at so you might need to replace them with novelties or blankies for it to make sense as for keycaps.

I like how they look and the overall theme but that’s pretty much it.

I believe this keyboard would benefit from upgrading to keycaps with dye sublimated or double-shot legends also this material leaves a lot of fingerprints.

For the switches i went with gateron blues i really don’t like clicky switches but at the time that was the only configuration with hot swept capabilities and i wanted that more than.

I dislike blues they’re not terrible but I just prefer a quieter typing experience as for the stabilizers they are lightly lubed from the factory but it doesn’t really sound like it.

It’s even hard to see so I went ahead and decided to mod this keyboard a bit to see how good it can become.

The layers on this keyboard cannot really be modified as there is no software to remap keys yet.

You get two default layouts one for mac and the other for windows they are really similar as they pretty much only swap the control and windows or command keys.

As well as the default function row controls function 1 and the number row will give you multimedia keys as well as the typical mac shortcut keys when using.

The mac layout and then function2 and the number row will actually translate to regular function keys one little detail that was really important for me is that the key at the right of the spacebar can either be mapped to control or alt and I really need it to be ALT.

So to switch between these two default mappings you need to hold function 1 k and r for 4 seconds.

If you plan on using it wirelessly to do so you need to switch the toggle to the Bluetooth mode and to pair with devices.

You hold down function 1 with q w or e for 4 seconds mapping this device to one of the 3 Bluetooth profiles.

I had no issues pairing the keyboard to my MacBook and this laptop doesn’t have super stable Bluetooth and then for general typing.

It was performing as expected with no major latency nor mixed up keys the latency was a bit more obvious on mac.

As on my iPhone, it was super reactive as always for gaming using the keyboard wired would be the best option to prevent unpredictable lag switching between devices was alright.

You can expect to wait between 3 to 5 seconds until you can start typing on the next device.

So you can expect this keyboard to last for a while on bluetooth especially if you don’t use the back lighting and leave the auto sleep mode on.

So, in conclusion, I really like this keyboard if you’re looking for a mechanical keyboard that has great support for mac and windows and good battery life over Bluetooth.

This one is a great option my unit is selling for 80 and I would go with the aluminum version if possible for a more premium look this build would be a hundred dollars which I think is reasonable for what you’re getting.

I would highly recommend the hot-swappable variant at least As you’re limited to three switch options otherwise as for downsides.

All things that don’t matter too much for me in a 65 keyboard under a hundred dollar so that wraps it up for today.