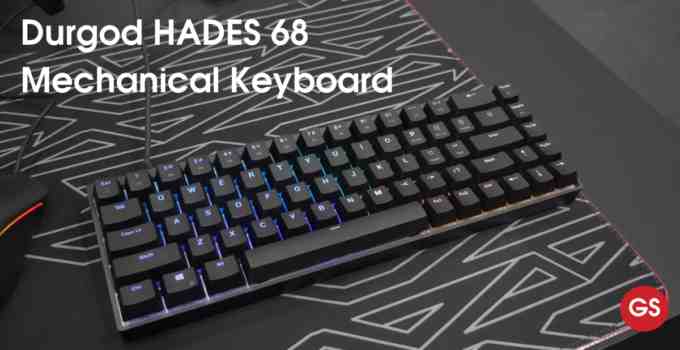 One of the up and comers in the mechanical keyboard market is Durgod, which aren’t hugely known, but I did see them at Computex, and they had some pretty impressive stuff, especially with their compact keyboards.

So today, we check out the Durgod Hades68 RGB mechanical keyboard.

Inside the box, there is a keyboard itself. A wire keycap puller, there are 2 cables, a USB-C to USB-A. And then a USB-C to C.

Some cable straps and a Durgod sticker and there was also a quick start guide. And straight away, you feel that refreshing cold metal touch.
So no flex with this guy at all.


And being fully aluminium, it does pack some heft coming in at just above 800 grams. And that’s the main feature of the keyboard, I guess.

Just having an aluminium case puts it in a different category compared to pretty much all the other prebuilt retail 65% keyboards, which all have plastic cases. The design is very simplistic.

The bezels are pretty slim, with the top being thicker to accommodate the lock indicator. LEDs, and it just gives it a bit more substance, which I like.

But there’s a considerable gap between the keycaps and the case, which is probably just to show off the RGB lighting a bit more. Personally, a prefer a proper high profile design for a cleaner look, but yeh, that’s how it is.


And yeh, it’s jus,t a very traditional design otherwise. No curves, just straight angular lines to give it some angle, so it’ll fit into any setup.

We have a bunch of rubber feet on the bottom, but no flip-up feet, which is the norm for this sort of size, and for aluminium boards. And the metal info plate is a nice touch.

Probably the weakest point of the keyboard for me is the keycaps. The font looks nice and clean, which I appreciate. But these are thin ABS caps that are laser etched.

So the legends will fade over time, and they’re much more susceptible to shine from your fingers.

I have Cherry MX Silent Red key switches, so a linear light switch, meaning that it has no tactile bump or click, and is dampened.

So paper thin keycaps aren’t exactly the nicest thing to pair them. Not the quietest silent switchboard out there and the ping on this keyboard is not that good as I thought.

You may not notice it when typing, or with a louder key switch, but it’s definitely noticeable with this configuration, especially with single hard presses.

The cool thing about this keyboard though, is that it comes with a solid range of key switch options. We have Cherry MX, Gateron, and Kailh Box.
So yeh, that’s awesome.

From what I’ve seen, the Cherry MX versions are a tad more expensive.
But yeh, I mean, the Gateron Blue is very similar to an MX Blue, and the Box White offers a different clicky experience.

But at least it does have good stabilizers with a minimal rattle, that doesn’t make the silent switch obsolete because they did lube the stabs.

And then Gateron Reds and Box Reds have the edge on MX Reds anyway.
Anyway, back to the keyboard, this is, of course, 65%.

So it’s like a 60% plus the dedicated arrow keys, which a lot of people love, and a few nav keys on the side.

And all that additional primary functionality only adds one more column, so we still get the space-saving and ergonomic benefits of a compact keyboard.

And all the missing keys are accessible via the FN keys, so that includes the F1 to F12 on the number row, the rest of the nav keys are on the right side.
And there are also some media controls.

It’s a very standard 65% layout in regards to keycaps sizes. So it’s just like the TADA68, which makes the keycaps nice and easy to replace.

There’s not a whole lot of variety with backlit keycaps, but I like the
look of just having it as a kind of underflow.

The Hades comes in at around $110USD and higher depending on the key switch. While the aluminium TADA68 starts at around $170USD.

Let’s look at their software, which is available on their website. So there are four profiles, default, FN1, FN2, and then combined. You can pick whatever key, besides the FN keys, and change them to whatever including being able to move your FN keys somewhere else.

We can also customize what our lock indicator LEDs show, which I don’t think I’ve seen before, so that’s pretty sweet.

And then we have our macro recording section, where we can record whatever, with delays as well. Once you compile your profile or profiles, you can download them onto the keyboard, so you don’t need to have the software installed to be able to use what you’ve made.

It looks nicer, build quality is also great, and it is heavier, and it does come with the awesome Cherry profile.

There are the SMD RGB LEDs for each key switch, and yeh, looks fine.
keycaps which look amazing.

But then the HADES has RGB backlighting, and 60 bucks is a lot of money, but it seems proportional, and you’d be happy with both depending on how much you want to spend.

The plate is made from aluminium, which is pretty standard for aluminium cases, whereas most plastic boards have heavier steel plates. Alright,

so overall, it’s a metal 65% keyboard, great stabs, with RGB backlighting and a solid piece of software, as well as coming in a variety of key switches which include Cherry MX, Gateron, and Kailh.


And all of this at a very fair price of 110$ and higher depending on the switch. You get the better software and aluminium case with the Hades.
It will be an amazing, feeling keyboard.

The other alternative that I mentioned before is the aluminium TADA68, but it is quite a bit more expensive. But the difference in quality is quite big.
I think the price sets it up to be a very strong contender in the market.