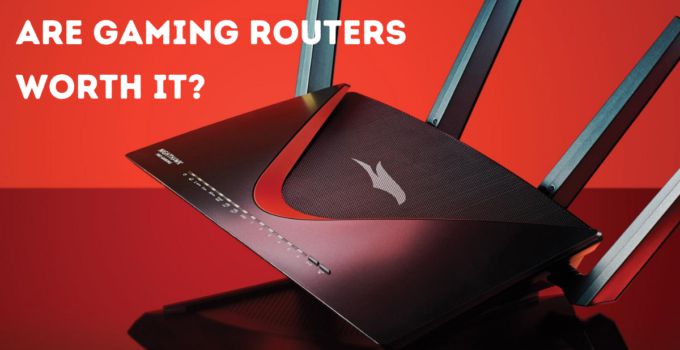 Are you on the fence about spending $300 to almost $400 on a gaming router well that’s great you found the right place because?

I can’t tell you all how many people asking me if buying a gaming router is worth the upfront cost. So first and foremost what exactly sets apart a gaming router from an ordinary router, well.

A gaming router does everything exactly the same as a standard router except most modern gaming routers have a built-in dynamic QoS algorithm they can detect time, sensitive game traffic and prioritize it.

To ensure that gaming devices always get the best connection and you do not suffer from lag caused by bloaty applications or heavy network traffic.

Sometimes flashy marketing there’s not much else that’s different from a standard router that is unless you’re buying one of the Netgear XR routers from all the gaming routers that.

I’ve personally tested and used the XR 500 gets my top pick and the reason for that is the Geo filter now the Geo filter is a proprietary firmware feature the exclusive to Netgear and netdouma router.

If you’re not familiar with how it works in short and ensures that when you’re playing multiplayer games you always play on the server that is closest to you 100% of the time.

No questions asked and this means that you still get the lowest paying possible for console players this is a really big deal because that means you can actually have control over which servers you’re playing.

On now currently, my entire home network runs exclusively on the XR 500 but if you’re looking for a more affordable option.

I highly recommend the XR 300 which is essentially a beefed-up our 7000 with the netDouma firmware the cool thing about the XR 300 is that essentially does everything the XR 500 does firmware wise except at half the price.

The only real trade-off is the hardware capabilities which for the average user is not going to be that huge of a deal.

So, to answer the question most casual players do not necessarily need a gaming router but for those that play competitively or just very serious.

About getting the best connection in multiplayer games it might be worth your investment so there you guys have it
I hope that you guys liked this article and found my opinion useful.